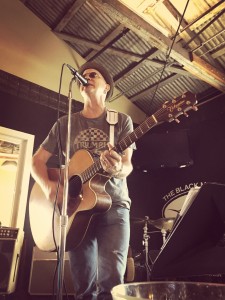 From the early days with his prominent Pasadena punk band “The Gas Moguls”, David was regularly selling out The Ice House in Pasadena weeks in advance. His songs “Boys & Girls” (produced by Dusty Street of KROQ radio) and “Honkey in a Babylon” (produced by John Nelson of the Eddie Money Band) were both played in rotation at KROQ radio in Los Angeles.

David wrote and recorded 2 albums with his band Pla:haus. (some songs produced by Steve Ferris of Mister Mister)

In 2012 David released his first solo record. This self titled CD (available at CD Baby & on iTunes) features the talents of some of his closest friends including Stevie Distanislao (CSN, David Gilmour) on drums. Joe Karnes (Fitz & The Tantrums) and Jorgen Carlsson (Gov’t Mule) on bass. Pete Thorn (Melissa Ethridge), and Greg Camp (Smash Mouth) on guitar. Greg and David collaborated on the song “You & Me”. (Greg wrote Smash Mouth’s #1 hit songs “Allstar” & “Walking on the Sun”)

David also has had moderate success in composing music for film and television. He co-wrote a featured song “Winston” for the video game “Major League Baseball 2006” for the Sony Playstation 2